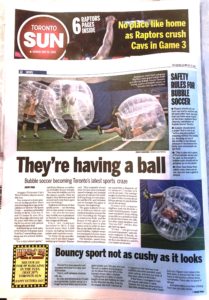 Please read the full article as it appeared in Toronto Sun

This is a media update from Toronto Sun:

Two teams of a dozen players are lacing up their shoes and stretching their legs on the sidelines of Toronto City Sports Centre – an indoor turf facility in the St. Clair Ave. E. and O’Connor Dr. area. It’s a quiet Thursday afternoon and the prize both sides are fighting for is a soccer ball, placed strategically mid-field.

And lined up on both sides of the ball are 12 human-sized “bubbles,” resembling something out of a science-fiction movie.

“It’s a very contact game,” said Henri Sharma, coordinator of Bubble Soccer Toronto. “You wear the bubbles and hit the players nearby. With the impact, they fall down and roll around and come back again and start hitting.”

Hogtown is the home of other quirky sports — axe throwing and escape games to name a few — but over the two years since bubble soccer premiered in Toronto, it’s now expanding into a league of 20 teams.

Since the company launched in 2014, it has hosted more than 5,000 events, including bachelor parties and corporate events.

“In three-to-six months’ time, you’ll see (the) league starting up in Toronto,” Sharma said. “This originally started from Sweden and eventually spread to Europe and Australia and now it’s all over the world. In Hong Kong, it’s very popular and the U.K. and Germany and we brought this game to Toronto. This is growing.”

The game is played six-on-six at different indoor and outdoor locations around the GTA including the Hangar at Downsview Park, and the beauty of the sport is, you don’t actually have to play sports well in order to have fun on the field with the oversized bubbles. A player wears two backpack harness straps and grips the handles in front.

The bubbles, made from thermoplastic polyurethane, are sized from a diameter of 1.2 metres to 1.7 metres, so it can fit all sizes. The average weight of a bubble is between 2.7 and 4.5-kilos. It costs about $30 per person to play bubble soccer for an hour.

Toronto tech company Digiflare took the field for a team-building game. Some team members went rolling as quickly as a pinball as their rivals hit them from the side, but after some laughter and “Are you OK?” checks, they got back up again.

“It’s fun – you get to wail on your teammates,” said software engineer Ty Rozak, 24. “It’s pretty hard. It’s a lot heavier than you think it is and it’s a lot harder to breathe.”

The world is more peaceful and insulated when you’re in your own little bubble.

That is, until someone smashes into you.

As cute and whimsical as it looks as a bystander, bubble soccer is a tough workout when you’re in the giant plastic suit. The guy who had the suit on before me apologizes for his blood that was left on the harness straps after a tumble.

Putting the 4.5-kilos of plastic weight on me and holding on tight to the attached handles, bracing for impact, the first I noticed as I stepped on the field was how muffled everyone sounded, even when yelling, and how you kind of lose your sense of direction.

A few times, I managed to kick the soccer ball when it came towards me, but was bounced by a few other people on the other team. Even as I flipped and rolled a few feet away, it almost felt like I was back in elementary school doing cartwheels. There was no sense of danger.

And when there is no fear of being hurt, you can play harder.

– Players should not run from one end to another and hit each other hard, because that can have some impact on the brain, explains Henri Sharma, coordinator of Bubble Soccer Toronto.

– A player should not hit a player that is not in an “active playing position,” meaning without the bubble on. Jumping on top of the bubble is not allowed because it can bounce the body back and people can get hurt.

– “This is also not a game of five bubbles versus one,” he said, so five people in bubble suits should not be ganging up on one player.

– Other than those three safety rules, there are no set rules for how a game is played.

Want to join the discussion?
Feel free to contribute!